My Split-Second Appearance on a 1990 Busch Gardens Commercial 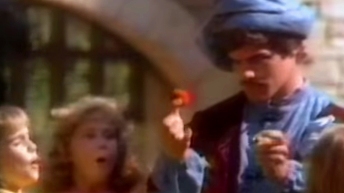 Even in 1988, $50 didn’t seem like a lot of money to be in a television commercial. But who was I to complain? I was doing what I loved for a living at a super-cool theme park to which I had unlimited access. Besides, the gig was a non-speaking part, so I didn’t even have to join the Screen Actors Guild (SAG).

Busch Gardens Williamsburg (as in Williamsburg, Virginia) ended up using only about one second of  my performance in the commercial. So that’s $50 per second. Hmm. Eight hours in a typical workday, which equals 480 minutes, which equals 28,800 seconds, which, at $50 per second, equals $1,440,000 per day. I could scrape by on that.

As it turned out, not only did I not end up with millions of dollars, I didn’t even get a copy of the tape, despite my repeated requests to Busch over the years.

Fast-forward to 2017, a year that exists in the age of YouTube, the online video storehouse featuring everything from cat juggling to tutorials on quantum mechanics. Fortunately, it didn’t take a physics lesson to finally find the Busch commercial I’m in.

An anonymous guy in Halifax, Nova Scotia, who calls himself Betamax King, recorded the commercial back in 1990, two years after it was filmed. He has more than one YouTube channel jam-packed with old video and audio clips he’s collected over the years.

Here’s the 30-second commercial with my appearance in all of its one-second glory. Do you think it’s worth 50 bucks?

Magician Tom Interval, owner of San Diego-based Interval Magic, provides magic entertainment and training to private and corporate clients locally and throughout the United States. A member of the Academy of Magical Arts (AMA), International Brotherhood of Magicians (IBM), and Society of American Magicians (SAM), Interval has captivated tens of thousands of people at numerous venues, including Busch Gardens theme park in Williamsburg, Virginia, where he performed as a medieval conjurer, trained employees of the magic shop, and promoted the park on several local TV talk shows along the East Coast. As an entertainer, business owner, and former marketing communications professional, Interval understands that the success of any event depends on how satisfied his clients' guests are. Whether it’s a trade show or 50th wedding anniversary, Interval is dedicated to providing his audiences with a highly visual, interactive, mind-boggling magic experience they’ll remember and talk about for years to come. To learn more, please visit www.intervalmagic.com.
View all posts by Interval Magic →
This entry was posted in Film, Multimedia, television and tagged ad, advertisement, ball trick, busch gardens, commercial, costume, england, flash, hastings, magic, magic trick, magicians, sleight of hand, sponge ball, television, the old country, tom interval, tominterval, trick, tv, va, virginia, williamsburg. Bookmark the permalink.