You’d think only one entertainer at a time could bill himself as “America’s foremost magician,” but that didn’t seem to phase some early to mid 20th-century performers, such as Ralph Richards, Anton Zamloch, Bob Haskell, McDonald Birch, and other lesser-known names.

While other illusionists, including David Copperfield, have surpassed Blackstone Jr. in terms of sheer fame, no modern magician has the stage presence Blackstone had. It’s true: He might not have appealed to popular audiences quite as much as the dry-ice-and-rocker box spinners, but Junior was one of a kind and, without a doubt, one of the greatest entertainers the world has ever seen.

From his grand illusion shows to his comedy nightclub act, Blackstone’s performances were as polished as his rich, full-toned speaking voice, which echoed performances of bygone days reigned by such legendary artists as his father Harry Sr., Harry Houdini, Harry Kellar, Howard Thurston, Charles Carter, and Harry Jansen (known as Dante). Sadly, that classic, eloquent style died with Blackstone in 1997.

Sixteen years earlier, I was lucky enough to meet Blackstone and see him perform his nightclub act at the now defunct Holiday House in Monroeville, Pennsylvania, a suburb just east of Pittsburgh. It was on the evening of June 10, 1981, when my parents and I watched the master magician perform such classics as the vanishing birdcage, zigzag, pickpocket routine, and floating light bulb, his signature illusion.

Long before that, I had seen David Copperfield, Doug Henning, and other professional illusionists strut their magical stuff. But I had never witnessed a magician so utterly in command of his audience, not only amazing them to pieces, but splitting theirs sides with laughter all the while. To say the least, his performance was outstanding and is one of my two favorite Blackstone memories.

So, what’s the other memory? 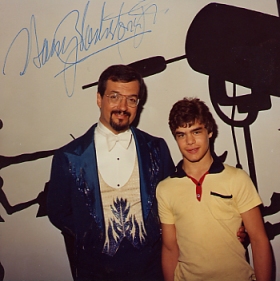 On June 4 of the same year, six days before his performance at the Holiday House, Blackstone was filming a television commercial at TPC Communications in Sewickley, Pennsylvania, another suburb of Pittsburgh. It was a spot for a car dealership in which he made the vehicle disappear and appear (through the magic of editing, not stage apparatus). Fortunately for me, TPC hired my father, Jerry Interval, a professional photographer, to take still shots of Blackstone inside TPC’s studio during filming. My dad brought me along, and I actually got to meet and speak with the master of prestidigitation himself!

Only 14 at the time, I immediately concluded he was one of the friendliest men I had ever met. Even with his celebrity status, he spoke to me as if I was his equal, asking questions about me and my interest in magic. I showed him my business card: a color photo of me holding a fanned deck of cards. He studied the picture thoughtfully as if it really caught his interest, then asked if he could keep it. To this day, I wonder if my card is among many others he might have collected from magicians over the years.

Although I didn’t know Harry well enough to call him my friend, or even well enough to call him Harry, the warmth and mutual respect he showed me that day made me feel as if I was something more than one of the thousands of anonymous, magic-obsessed kids he met each year. What a great role model, not only for budding young magicians, but also for adults who want to communicate better and genuinely connect with children.

So on this 30th day of June, I’d like to extend my sincerest birthday wishes to you, Harry. I know you can’t read this, but if you could, I know you’d feel a sense of satisfaction knowing how many lives you’ve positively affected over the years. That’s about as close to performing real magic as you can get.